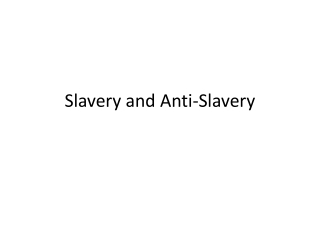 Slavery and Anti-Slavery. Slavery. Slave trade defined as the enforced migration of people across national boundaries over long distances to bondage in a different setting Ancient empires of Egypt, Greece and Rome all utilised slave labour The Expansion of Slavery and Anti-Slavery - . i. 4 common myths about slavery. middle school interpretation of slavery:

Slavery and anti-slavery: a history and analysis - . and we have been informed that thou hast forbidden the trading in

ANTI SLAVERY MOVEMENT - . &quot;i do not wish to think, or speak, or write, with moderation. . . . i am in earnest

Pro and Anti-Slavery Arguments - . the political argument. the 1840's saw the continuing debate over the issue of

The Anti-Slavery Movement - . 8.3. objectives. describe the lives of enslaved and free african americans in the 1800s