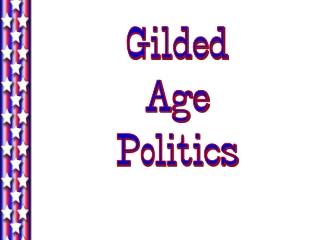 Gilded age Politics - . bell work: 1.what is the spoils system- when did it form? 2.what is a stalwart (conklin)? 3.what

Politics in the Gilded Age - . “i know now that all that glitters is not gold... however, i still go underrating men of

Politics in the Gilded Age - . the “politics of equilibrium&quot;. 1. a two-party stalemate. two-party

POLITICS IN THE “GILDED AGE” - . political machine – an organization that provides services to voters and

Politics in the Gilded Age - . 15.3 typical 2 nd home for the wealthy while the working class live in tenements .

POLITICS OF THE GILDED AGE - . populist movement . farming dominated the lives of most americans in the south and west

Gilded Age Politics - . “the era of good stealings ” 1869 to 1896. political issues. in addition to reconstruction

Gilded Age Immigration and Politics - . mon nov 22, 2010 us history paulson. spark # 5. when was the last time you needed