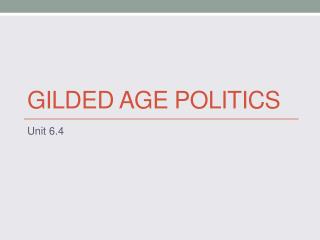 Essential Question : How did the chaotic conditions of urban America in the Gilded Age contribute to “progressive”

The Political Frame - Chapter 9 power, conflict, and coalition politics in organizations leaders are naieve and romantic

Politics of Government - . part 1: law and politics. what is the authority of law?. u.s. constitution: supreme law of

The Gilded Age 1870-1890 - . gilded means to cover something of poor quality with gold what does this imply about

Populism and Progressivism Government and Politics at Home and Abroad - . chapter 12. politics in the gilded