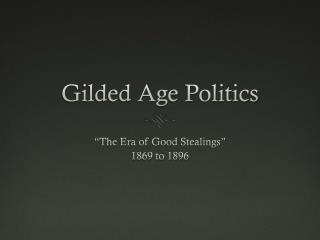 Gilded Age Politics. “The Era of Good Stealings ” 1869 to 1896. Political Issues. In addition to Reconstruction (previous chapter), 4 key issues were prominent at the national level. However, uncertainty and an ever changing political landscape led to little achievement in these areas: Gilded Age Politics - . chapter 23. essential question?. in what ways did the politics of the gilded era reflect the

Gilded age Politics - . bell work: 1.what is the spoils system- when did it form? 2.what is a stalwart (conklin)? 3.what

Gilded Age Politics - . parties, patronage and public interest. why was party identity so strong in the gilded age?.

Gilded Age Politics - . the era of lousy presidents. the election of ulysses s. grant. a. popular support for grant 1.