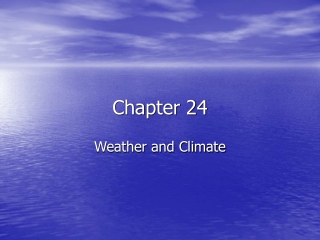 Chapter 24. Weather and Climate. 24.1 The Atmosphere. It’s the protective layer that surrounds Earth It protects Earth from UV rays It moderates the temperature It contains gases that are essential for life. Composition of Atmosphere. 78 % is nitrogen 21% is oxygen