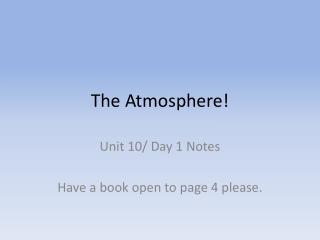 The Atmosphere!. Unit 10/ Day 1 Notes Have a book open to page 4 please. Do you know?. Before we begin, talk these questions over with your group mates: Have you ever heard of the atmosphere before? If so… How? Where? What is the common gas in the atmosphere?