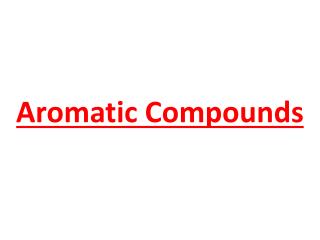 Aromatic Compounds. Discovery of Benzene. Isolated in 1825 by Michael Faraday who determined C:H ratio to be 1:1. Synthesized in 1834 by Eilhard Mitscherlich who determined molecular formula to be C 6 H 6 .

25-1 Werner’s Theory of Coordination Compounds: An Overview - . compounds made up of simpler compounds are called