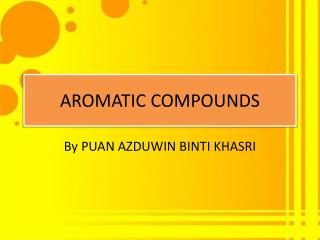 AROMATIC COMPOUNDS. By PUAN AZDUWIN BINTI KHASRI. Criteria for Aromaticity. 1. A compound must have an uninterrupted cyclic cloud of

25-1 Werner’s Theory of Coordination Compounds: An Overview - . compounds made up of simpler compounds are called