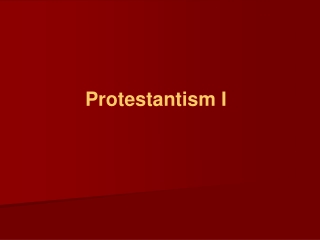 The Six Wives of Henry VIII - . antecedents. during the 16th century, the protestant reformation played an extraordinary

The Spread of Protestantism and the Catholic Response - . 12.4. the zwinglian reformation and calvin and calvanism.

The Religious Situation in Europe during the 1700’s - By harrison pauley, kenan keyser, john groogan, and seth

Rise of Absolutism - . thirty years war. what is the point of this “basically meaningless conflict?” demonstrates the

Effects of the Protestant Reformation - . ms. stiles. spread of the reformation . emperor charles v was too distracted to

World Religions Map Activity - . chelsea layton drew mines. just do it. brainstorm as many countries as possible in which

Religious Settlement - . religion in england. introduction. religion had divided england since 1530 . . when elizabeth

Elizabethan Era - . elizabethan religion and beliefs. one of the best statements of elizabethan protestantism is a

The Wars of Religion - . france, england and the 30 years war. the age of the religious wars. after the reformation,

The Impact of Words - . choosing the right word. good writing weaves together the general and the specific, the abstract