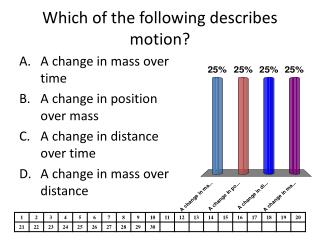 UNIFORM CIRCULAR MOTION - Uniform circular motion is motion in which there is no change in speed, only a change in

Chapter 2 - . motion in one dimension. dynamics. the branch of physics involving the motion of an object and the

Describing Motion KINEMATICS in One Dimension - . “to understand motion is to understand nature.” leonardo da vinci.

Do now – on a new piece of paper - . the diagrams below represent two types motions. one is constant motion, the other,

Chapter 2 Motion in One Dimension - . motion is relative. an object can be moving with respect to one object and at the

A Mathematical Model of Motion - . chapter 5 physics. 5.1 graphing motion in one dimension. interpret graphs of position