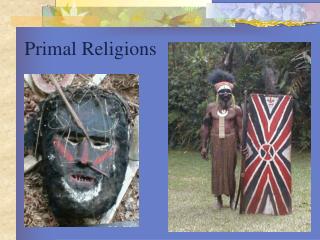 Primal Religions. Primal religions originated first. They are generally the traditions of nonliterate people-which means they do not depend on scriptures or written teachings as do most other religions. PRIMAL RELIGIONS - . the religions we hear of today are only the tip of the iceberg and are relatively new compared to

Primal Religions continued… - . totem activity. think of someone you respect, someone you can describe to me in detail.

Primal Methods - . by a primal method of solution we mean a search method that works on the original problem directly by