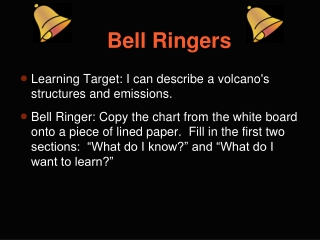 Bell Ringers. Learning Target: I can describe a volcano's structures and emissions. Bell Ringer: Copy the chart from the white board onto a piece of lined paper. Fill in the first two sections: “What do I know?” and “What do I want to learn?”. Extra Terms. Caldera dike Biotechnology Bell ringers for September 21 st , 2010 - Where do microbes like to grow? what are the three essential

Biotechnology Bell Ringers for October 19 th , 2010 - . how many organisms are required for asexual reproduction in

Biotechnology Bell Ringers September 27 th , 2010 - . what are some differences between plant cells and animal cells?

The Crucible Bell Ringers - . bell ringer: day 1. choose one of the following topics to write about in a two paragraph

Career Decisions Bell Ringers for September 1 st , 2010 - . interests are made up of hobbies, activities, and what? name