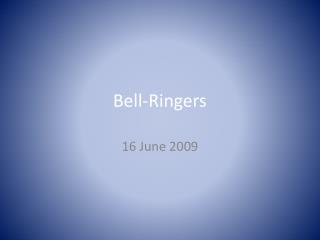 Bell-Ringers. 16 June 2009. Archimedes’ Lever. The Prediction. “Give me a place to stand and a lever long enough and I will move the earth.” Do you think this is possible? Why or why not?. Algebra 1 Bell Ringers - . 1 st 6 weeks. objective 1 the student will describe functional relationships in a variety of

Bell Ringer 8-9-10 - . what is science? explain three main skills that scientists use. define the term scientific

The End Of The World! - . freindly bystander!. aliens!. humans!. we have found the crash site. holo box has been found.

Bell Work - . which of the following explanations do you think shows the best understanding of the quotation and why?.

Bell Ringer - . “so far as man thinks, he is free. thought takes man out of servitude into freedom.” -ralph waldo

Bell Ringer - . get out your notebook and prepare to take notes on chapter 7 list five shapes you see in the classroom.