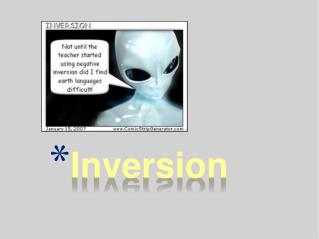 Inversion. INVERSION FOUNDATIONS. The normal word order for English sentences is : Subject+verb Example : ‘She is laughing .’ We cannot change the word order . We cannot say : ‘Laughing she is’ nor ‘Is she laughing’ (at least not in an affirmative sentence).