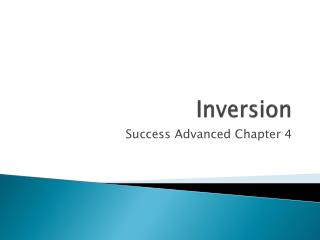 Inversion . Success Advanced Chapter 4. What is inversion ?. In statements the subject normally comes before the verb. I had n’t thought I would end up becoming a teacher. Sometimes, after certain words or expressions, this word order is reversed and this is called inversion