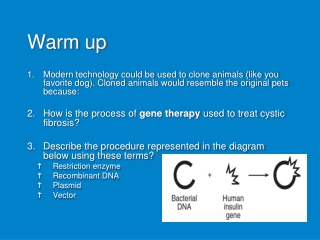 Warm up. Modern technology could be used to clone animals (like you favorite dog). Cloned animals would resemble the original pets because: How is the process of gene therapy used to treat cystic fibrosis? Describe the procedure represented in the diagram below using these terms?