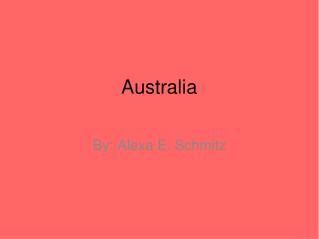 Australia. By: Alexa E. Schmitz. Australia is the only country that is also a continent. The coordinates of the capital city, Canberra, Australia are 35°S and 149° E. Location. On it's left is the Indian Ocean, and on the right is the South Pacific Ocean. It is located southeast of Asia.