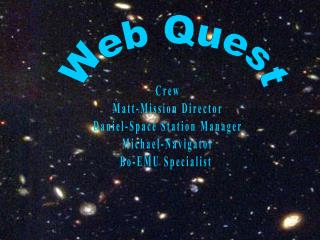 -. Web Quest. Crew Matt-Mission Director Daniel-Space Station Manager Michael-Navigator Bo-EMU Specialist. ASTRONAUTS. How does a person become an astronaut?. You have to be 64" to 76" tall Be a geologists, physicists, chemists, biologists etc.