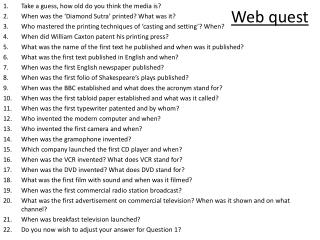 Web quest. Take a guess, how old do you think the media is? When was the ‘Diamond Sutra’ printed? What was it? Who mastered the printing techniques of ‘casting and setting’? When? When did William Caxton patent his printing press?