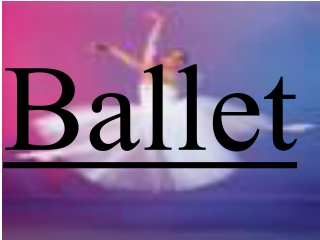 Ballet. When Louis XIV was crowned his interest in dancing was strongly    supported and encouraged by Italian-born Cardinal Mazarin, who assisted Louis XIV. Technique - . this powerpoint will help you to: give examples of technical skills specific to ballet and contemporary by

Ballet History and Vocabulary - . goal: 1. to be able to write out the steps of ballet and the meaning. 2. to understand

BALLET HISTORY - . what is ballet?. ballet is a way of telling a story using music and dance instead of words. it

Ballet In Europe - . by: savannah mason. what is ballet?. ballet is a popular dance in europe. ballet has some moves that

All About Ballet - . there are many equipment that you need. you need special slippers that bend. you need a smooth

Maurice Bejart - . by ashley votta . pair of ballet shoes . this is one of his pieces called bolero, with strong male

By Jan Rasband - . the art of ballet. in ballet class, there are two very important things that you need to remember to

Picking the Best Foldable Flats for Ballet Practice - Ballet shoes come in a variety of colors and sizes. they are