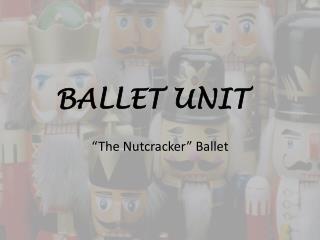 BALLET UNIT. “The Nutcracker” Ballet. PART TWO . COSTUMES IN BALLET. Women’s Costumes. Costuming conventions in ballet are very old-they date from the way in which people “dressed up” in the Renaissance. At that time, women wore long, heavy skirts. . Women’s Costumes. Ballet - . the word ballet is french and began being used in english around the 17th century. the french word originated