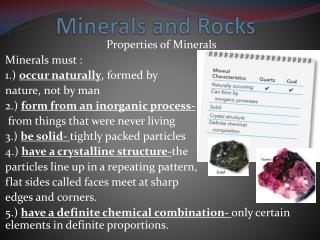 Minerals and Rocks. Properties of Minerals Minerals must : 1.) occur naturally , formed by nature, not by man 2.) form from an inorganic process- from things that were never living 3 .) be solid- tightly packed particles 4.) have a crystalline structure- the ANALYSIS OF ASH AND MINERALS - . introduction. ash content is a measure of the total amount of minerals present within a

Weathering, Erosion and Deposition - . by: brianna shields. do now. how are igneous rocks made? when rocks are pushed

High efficiency simultaneous grinding and drying of minerals and sludges - . presentation for: 15 th annual conference on

The Trace Minerals - . chapter 13. the trace minerals – an overview. food sources depend on soil and water composition