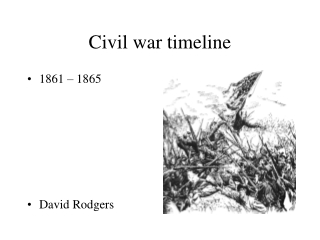 TIMELINE - . by ‘imaiokalani park. american civil war. caused by injustice taxation and use of slaves in the south took

World War II - . a timeline of events. timeline. 1922 – mussolini becomes dictator in italy. he is known as “il

Rosa Parks - . what she d id to change the world. objectives. by the end of this presentation, you will know: background

Ch 15 - . analyze the effect of westward expansion on slavery &amp; also events that led to civil war #2 (the entire

Timeline - Civil war 1975 – 1990 conflict erupts after a bus attack by a christian militia , the phalangists. timeline.