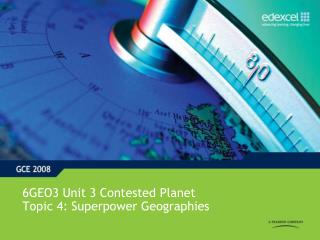 6GEO3 Unit 3 Contested Planet Topic 4: Superpower Geographies . What is this topic about? . The superpowers, and emerging powers, are the most powerful and wealthy nations They have both economic and political power, often globally Unit 2-1 Exam Questions - . directions. in the table of contents, click the topic for which you want to see regents exam