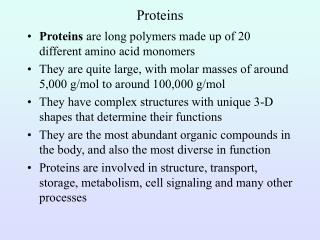 Proteins. Proteins are long polymers made up of 20 different amino acid monomers They are quite large, with molar masses of around 5,000 g/mol to around 100,000 g/mol They have complex structures with unique 3-D shapes that determine their functions Proteins - . proteins serve many functions, including the following: 1. structure: collagen and keratin are the chief

Proteins - . digestion and absorption of proteins. the protein load received by the gut is derived from two primary

Proteins - . proteins are long polymers made up of 20 different amino acid monomers they are quite large, with molar

Proteins - . protein basics. proteins come from a greek word meaning of “ prime importance .” like both carbs and

Proteins - . used in variety of cellular functions made of smaller amino acids only 20 amino acids… but thousands of

Proteins - . protein. the main function of protein is to build and repair tissues (muscle tissue). protein. protein can