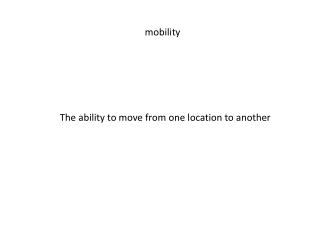 mobility. The ability to move from one location to another. migration. Permanent move to a new location. A country has net in-migration if emigration is _____________ immigration. less than. _______________ push factors cause most refugees to migrate. cultural. Social stratification - . social mobility: movement from one social stratum to another: upward mobility vs downward