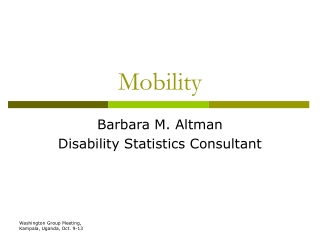 Mobility. Barbara M. Altman Disability Statistics Consultant. Part I: Discussion of Response Patterns. Mobility Questions. Washington Group Question: Do you have difficulty walking or climbing steps? No, No difficulty Yes, Some difficulty Yes, A lot of difficulty Cannot do at all Mobility - . objectives. examine new security challenges and attacks specific to mobile services. give an overview of the

Mobility - . matt hornbrook james beams. what is mobility?. nodes in the network allowed to move with respect to one

Mobility - . methods for document access while away from the office. options summary. no dms installed remote desktop rdp

Mobility - The unprecedented rise of smartphones and tablets and what it means for local government . lgict conference

Mobility - . doing business with the world - the new role of corporate leadership in global development. geneva,

MOBILITY - . maldives. rs comments some times pain in the foot walk only using toes not allowed to climb steps when

mobility - . the ability to move from one location to another. migration. permanent move to a new location. a country

Mobility - . mike freedman cos 461: computer networks http://www.cs.princeton.edu/courses/archive/spr14/cos461/. why (and

Mobility - . for dairy industry. introduction. indians are predominantly vegetarian and milk serves an important part of