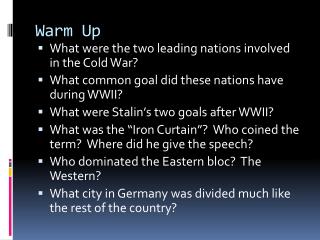 Warm Up. What were the two leading nations involved in the Cold War? What common goal did these nations have during WWII? What were Stalin’s two goals after WWII? What was the “Iron Curtain”? Who coined the term? Where did he give the speech? Who dominated the Eastern bloc? The Western?