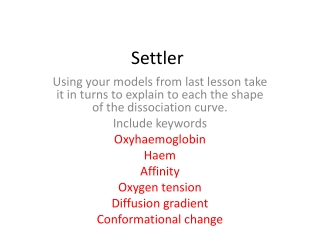 Settler. Using your models from last lesson take it in turns to explain to each the shape of the dissociation curve. Include keywords Oxyhaemoglobin Haem Affinity Oxygen tension Diffusion gradient Conformational change. Module 3 Exchange and transport. 8.4 Carriage of carbon dioxide. Settler - . students answer their question then pass it on to the next group to see if they can add any further detail.

Settler: - . in pairs write down as many emotions that you can think off…. do all children go through transitions

Settler - . describe the pathways and mechanisms by which water passes from the soil to the xylem vessels in the root.

Settler Activity: Solve the anagram (rearrange the letters to make one word) - . i cure old. crude oil. the science game.

If you were a new settler in Africa where would you want to live? - Why? (provide specific reasons according to