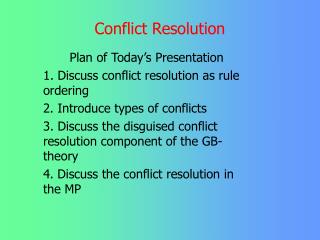 Conflict Management Processes - . week 5 chapter 9. objective. by the end of the class you will be able to… define how

Conflict in Cub Pilot on the Mississippi - Learning goals. differentiate between internal and external conflict. identify

Genomic Conflicts, Health and Disease What are genomic conflicts and - How are they involved in health and disease? (2)

Conflict and Negotiation in the Workplace - . conflict at microsoft. various sources conclude that microsoft is riddled