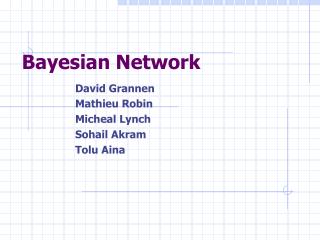 Bayesian Network. David Grannen Mathieu Robin Micheal Lynch Sohail Akram Tolu Aina. Bayesianism is a controversial but increasingly popular approach of statistics that offers many benefits , although not everyone is persuaded of its validity.

Bayesian Network - . introduction. independence assumptions seems to be necessary for probabilistic inference to be

Bayesian Network Classifier - . not so naïve any more or bringing causality into the equation. review. before covering

Bayesian Network and Influence Diagram - . a guide to construction and analysis. chapter 1. introduction. this chapter