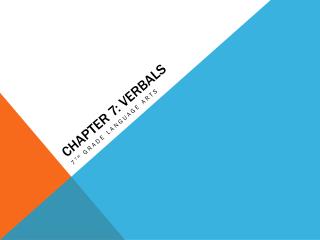 Chapter 7: Verbals. 7 th Grade Language Arts. Lesson 1: Gerunds. A verbal is a word that is formed from a verb and that acts as a noun, an adjective, or an adverb . There are three kinds of verbals : gerunds, participles, and infinitives . Gerunds.