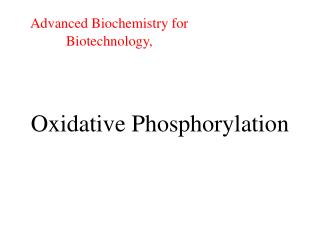 Advanced Biochemistry for Biotechnology,. Oxidative Phosphorylation. Conventional view of mitochondrial structure is at right. Respiratory chain is in cristae of the inner membrane . Spontaneous electron transfer through. Reductive denaturation and oxidative renaturation of RNase A - . plausible mechanism for the thiol- or enzyme-catalyzed

CH11 Cell Communication - . vocabulary directions: mark each term to indicate if you know it, are unsure, or don’t.

Bioenergetics and Oxidative Phosphorylation - . bioenergetics : describes the transfer and utilization of energy in