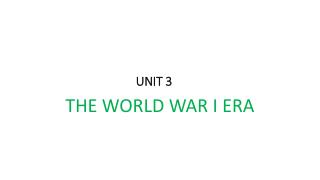 UNIT 3. THE WORLD WAR I ERA. OBJECTIVES. CORE OBJECTIVE: Analyze the causes and effects of World War I. Objective 4.3: Analyze the military and financial ways in which America prepared for war.