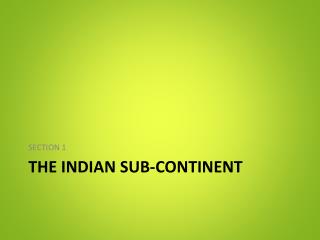 SECTION 1. The Indian sub-continent. India Divided. After WWII Great Britain determined that India would have to be split into one Hindu nation ( India ) and one Muslim nation ( Pakistan ). On August 15 th 1945 both nations became independent from Great Britain. The Indian Sub-Continent Since 1947 - . pakistan &amp; india . independence. the sub-continent was “partitioned”

flights to Kathmandu and Indian Sub Continent - Are you stuck in new zealand owing to the pandemic? you can now book

Acts before separation of Sub-continent - . act of 1861. back ground. complete control of british on political system.

The Indian sub continent with a Population of 1.27 billion has - 62.4 million D iabetics - Did you know?. the indian sub