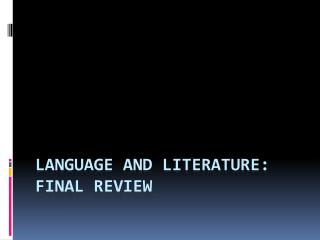 Language and Literature: Final review. Joseph Conrad. In his work Judea, Conrad calls into question the English’s belief in Manifest Destiny Manifest Destiny: the divine right of a superior race to rule a civilization seen as being lower on the scale of evolution. Heart of Darkness.

CS 61b: Final Review - . data structures steve sinha and winston liaw. disclaimer. we have not seen the exam. we do not

Review for Final - . logic. deductive validity. we say that an argument is deductively valid when it has the following

Review for Final Exam - . the most noted king of the mali was:. the longest lasting of the sub-khanates after the breakup