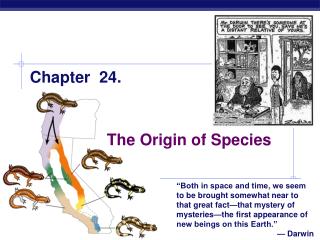 Chapter 24. The Origin of Species. “Both in space and time, we seem to be brought somewhat near to that great fact—that mystery of mysteries—the first appearance of new beings on this Earth.” — Darwin. What is a species?. Biological species concept defined by Ernst Mayr Chapter 24 - . measuring the cost of living. in this chapter, look for the answers to these questions:. what is the