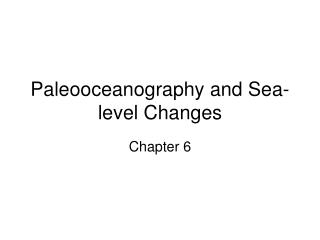 Paleooceanography and Sea-level Changes. Chapter 6. Information about past history of the ocean basins comes from Magnetic anomalies and related data The seafloor sediments These retain a record of the events in the overlying waters Also can tell us about sea level change. Sea Level Changes - . sea-level change. sea-levels are predicted to rise by 1m this century (by 2100). why?. sea-level

Sea-Level changes - . learning objectives. the shape of the planet: difference between geoid and ellipsoid the concept of

Impact of Sea Level Changes on Barrier Islands - . we’re all going to die!. the myth of sea level rise and global