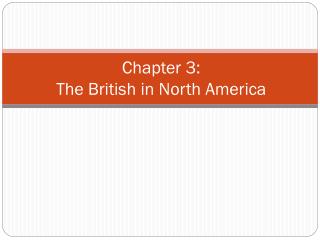 Chapter 3: The British in North America Chapter 3: The British in North America. At the same time as the French, Britain wanted to expand it’s empire through colonies too Like the French, many first colonies failed because they couldn’t live in the New World Walter Raleigh tried twice to do this in 1585 and 1587.

Chapter 3: The British in North America

Chapter 2: United States and Canada - . landform geography. both are on the north american continent. crustal mass

Chapter 5 Advanced Program - . review game. 1. the magna carta was a document that. a. shifted the power from the

SLAVERY IN THE COLONIES - . american arrival. when african slaves were brought to north america ( aka…the original 13

British North America - . unit 2. the big questions. 1. where and why did colonists settle in british north america after

EXPERIENCE OF EMPIRE: EIGHTEENTH-CENTURY AMERICA - . america: past and present chapter 4. a new kind of society. british

Practice Test - . world history ap #9. which of the following areas was probably the destination for the most slaves