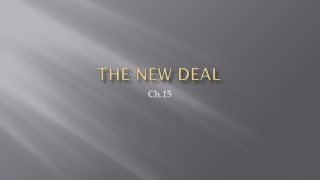 The New Deal. Ch.15. Roosevelt’s New Deal. Four months elapsed between the election and FDR taking office Worked with his advisors, the Brain Trust, on new policies that came to collectively be called the New Deal Policies focused on 3 goals Relief, recovery, and reform Hundred Days