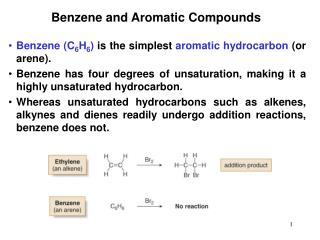 Benzene and Aromatic Compounds. Benzene (C 6 H 6 ) is the simplest aromatic hydrocarbon (or arene). Benzene has four degrees of unsaturation, making it a highly unsaturated hydrocarbon.

Aromatic Compounds - . nomenclature of benzene derivatives benzene is the parent name for some monosubstituted benzenes;

AROMATIC COMPOUNDS - . by puan azduwin binti khasri. criteria for aromaticity. 1. a compound must have an uninterrupted

Chapter 4: Aromatic Compounds - . bitter almonds are the source of the aromatic compound benzaldehyde. sources of

2 – Friedlander's synthesis - . it involves the condensation of α­ aminobenzaldhyde with acetaldehyde in the presence