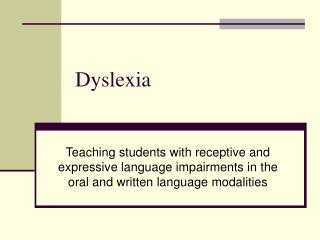 Dyslexia. Teaching students with receptive and expressive language impairments in the oral and written language modalities. Contents. 1. What is Dyslexia? 2. Identification, diagnoses and treatment considerations? 3. What are some ways to approach treatment? 4. Answering questions…. Dyslexia - . definition of dyslexia. dyslexia is a specific, neurological learning disability. it is characterized by

Dyslexia - . by: dr. chendra williams. definition. dyslexia is the name for specific learning disabilities in reading

Dyslexia - . reading gives me headaches. the words are always moving. when i am reading if feels like i skinned my knee,

Dyslexia - . dehne anstee and nick simmons. what is dyslexia. dyslexia literally means 'trouble with words'. it is the

Dyslexia - . definition 1968. “a disorder manifested by difficulty in learning to read, despite conventional

Dyslexia ; - Dyslexia is something like swimming with your clothes , it is very difficult but not imposible . sometimes

DYSLEXIA - Knowing about. please ……… “ walk away ”. dyslexia. simple definition- -dyslexia is an

Dyslexia - . what does it mean? (click on the word dyslexia above to watch a short video about dyslexia). international