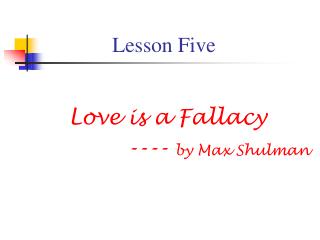 lesson Five - . twelve angry men (part one). discussions. 1.what was the evidence against the boy?. 2.how did it fall

Lesson Five - . text a twelve angry men (part one). faculty of humanities and social sciences department of languages and

Lesson Five - . i can work like a guy. teaching aims. 1. oral aspect to practice drill c; to retell one paragraph of the

Lesson Five - Aims . to have a basic knowledge of the terms in logic.to appreciate the humor in the story.to analyze the

Lesson Five - . discovering the chemical nature of the gene. what are genes?. genes are hereditary units that occupy

Lesson Five - Vietnam as we saw it. lesson

lesson five - . living on your own presentation slides. the cost of moving. moving costs can include: renting a

Lesson Five - . love is a fallacy ---- by max shulman. aims . to have a basic knowledge of the terms in logic. to

Lesson five - . shopping . lesson objective. in this lesson we will learn… words for fruits words for clothes words for

Lesson Five - . love is a fallacy ---- by max shulman. objectives of teaching. to comprehend the whole text to lean and