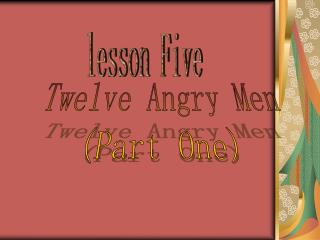 lesson Five. Twelve Angry Men (Part One). Discussions. 1.What was the evidence against the boy?. 2.How did it fall piece by piece through the discussion? 3.What would have happened to the boy if he had been found guilty?. About the author. The Lesson - . monday: why did jon and bill want to mow mr. dill’s lawn? tuesday: what was the lesson that jon learned

The Ultimate Lesson - . aquinas college. the theme of this presentation is that a lesson is only truly the “ultimate”