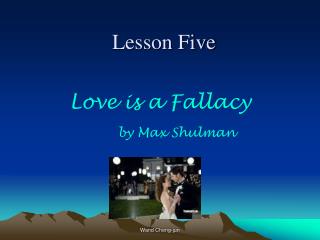 Lesson Five. Love is a Fallacy by Max Shulman. Background information. About the author Max Shulman. Max Shulman. a writer in the early '40s as one of America’s best-known humorists. Lots of his novels were adapted to the screen. Lesson 1: Exploring Access 2007 - . lesson objectives. after studying this lesson, you will be able to: define what a