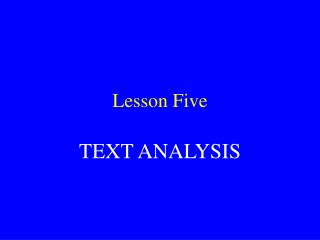 Lesson Five. TEXT ANALYSIS. What is text analysis?. Text analysis is designed to analyse text and draw conclusions as to the linguistic and stylistic structures of a given text. Language Functions. Expressive (eg. literature) Informative (eg journalism ) Performative (eg. advertising) Vocabulary Lesson 1-15 - . &quot; the finest words in the world are only vain sounds, if you cannot comprehend