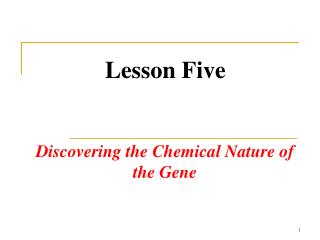 Lesson Five. Discovering the Chemical Nature of the Gene. What are genes?. Genes are hereditary units that occupy specific locations on chromosomes and determine particular characteristics in an organism. Genes exist in a number of different forms and can undergo mutation. Warm Up - Unit 2 lesson 1 . warm up. problem of the day. lesson presentation. lesson quizzes. warm up evaluate each

Logistics - . product lifecycle management. lesson overview in this lesson you will receive an overview of mysap product