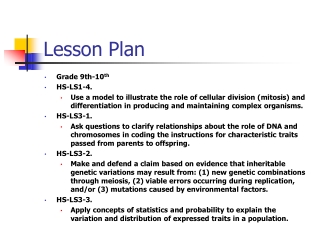 Lesson Plan. Grade 9th-10 th HS-LS1-4. Use a model to illustrate the role of cellular division (mitosis) and differentiation in producing and maintaining complex organisms. HS-LS3-1. Basic Session Planning - Objectives. state what to plan for on a session/lesson plancreate an aimcreate at least 2 smart

The Foundations of constructivist teaching and learning and the 5E Lesson PLan - . engineering the future workshop -

Lesson plan - . i found this a difficult lesson to do as many of my younger children will find meditating difficult. i am

Lesson Plan Record - Index……. lesson plan’s first page should have………. name of the school : name of the

Unit/Lesson Planning 101 - . what is a unit plan?. a series of lessons generally related to a theme or having a common