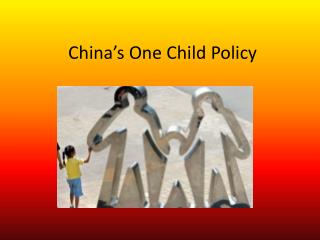 China’s One Child Policy. One Child Policy. It was created by Chinese leader Deng Xiaoping in 1979 because China’s population growth was too high. It was supposed to be a “temporary measure,” but they never stopped it. The law only lets you have one child. China ’ s One-Child Policy - . why does the policy make sense?. unemployed? employed for a short period only? is

CHILD NUTRITION IN CHINA: WITH SOME COMPARISON TO INDIA - . wang zhen institute of economics, cass 11, nov, 2013.