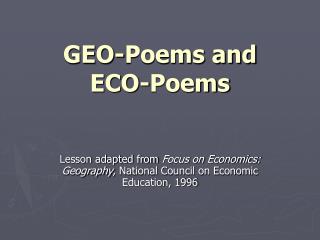 GEO-Poems and ECO-Poems. Lesson adapted from Focus on Economics: Geography , National Council on Economic Education, 1996. Purpose. To organize and present information To use creativity when developing the “poems” To demonstrate understanding about a place in a fun, but non-traditional way